This month we have been tracking with concern how rapidly a third wave of the coronavirus is spreading across Africa given the limited vaccine availability in African countries. The virus is straining health systems and driving stringent new lockdowns and school closures. Our thoughts go out to all our partners and communities suffering the results of this wave.

Among the commitments at the Generation Equality Forum the Gates Foundation promised $2.1 Billion, a portion of which will go towards shoring up women’s economic empowerment by strengthening the care economy. This could be significant especially in the wake of COVID — researchers at the Center for Global Development put out estimates on the Global Childcare Workload from School and Preschool Closures During the COVID-19 Pandemic suggesting women in low- and middle-income countries took on several additional hours of unpaid childcare each day schools were closed.

In celebration of Father’s Day, Promundo’s annual State of The World’s Father’s Report looks at structural solutions to achieve greater equality in care work. The report argues that men need to be accountable for doing more care work, and that societies need to transform the “structural factors that drive and influence the value of care in society and who undertakes that work.” Among the proposed solutions are policies like funding or subsidizing universal childcare, providing parental leave for all parents, working to change gender norms around men’s unpaid care work, and more. Notably, recent longitudinal evidence suggests that some of Promundo’s own work to change social norms appears to have had lasting effects in Rwanda, resulting in men taking on a fairer share of added caregiving responsibilities during the COVID-19 crisis. 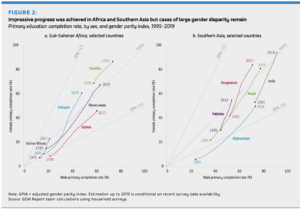 Generation Equality came just over 25 years after the Beijing Declaration and Platform for Action. Girls’ education was one of 12 key areas in that visionary agenda for women’s empowerment. UNESCO’s Global Education Monitoring Report examines whether we are fulfilling the promises on girls’ education made a quarter century ago. The progress toward gender parity over this period has been tremendous (see figure below). But there are still extreme disparities against girls, including 20 countries in which barely any poor, rural girls finish secondary school.

Yes, all programs, in crisis affected countries or not, should include gender-responsive strategies. This NPR piece slightly mischaracterizes the findings of recently published research by David Evans and Fei Yuan. The headlines suggest that “Their biggest finding is that gender-neutral programs…can be just as effective at improving girls’ education as programs designed just for girls.” In reality, what the paper shows is that programs that reach both boys and girls can have just as big an impact on girls’ education outcomes — and they are most likely to have an effect if they are gender-responsive, not gender neutral. For example “the most effective interventions are those that address costs related to specific obstacles that girls face in a particular setting” (emphasis added).

School-related gender-based violence (SRGBV) is one particular obstacle for girls underscored by the latest in a series of four studies on that topic. Madalo Samati finds that about 70 percent of students in primary schools in Malawi have experienced SRGBV. Globally, in 2020, child helplines responded to over 1.9 million calls, 25% more than in 2019. In Tanzania the government has taken some steps to ensure that pregnancy is not a definitive end to a girls’ education. And in Cameroon, female deputy chiefs are an important line of support for girls’ education.

Another barrier for girls is what their teachers believe they can do. Shwetlena Sabarwal, Malek Abu-Jawdeh, and Radhika Kapoor reviewed why teacher beliefs matter and what they are. They find that (1) many teachers do not think they can do anything to help disadvantaged students learn; (2) in most countries, teachers think students who are already performing well are the ones who deserve extra attention, not the ones who are lagging behind; (3) nearly a quarter of teachers think it is ok not to be in the classroom if the students have been left with work to do. As the authors point out, what teachers believe determines where they direct their attention and effort. Influencing their stereotypes around gender capabilities, mindsets about what students can (and cannot) learn, and bias towards attending to “better” students” may be a precursor to getting other interventions to make a difference.

Last but not least, looking for a way to visualize the massive numbers of children who are not getting a fair shake at education? Check out the “Lost Potential Tracker” from the ONE Campaign.